Depending on where you live you might be getting, or have already gotten, your first heat waves. Living in a part of the world that is prone to extreme heat, temperatures above 90 degrees Fahrenheit, can lead to some deadly situations. It’s important to know how to stay safe in extreme temperatures.

What are Heat Waves?

Scientifically speaking, heat waves occur when a high pressure system forces air downward. This force prevents the air from rising into the atmosphere. The air then acts like a cap. It traps the warm air towards the ground. Without the movement of air is when we feel that heat wave. 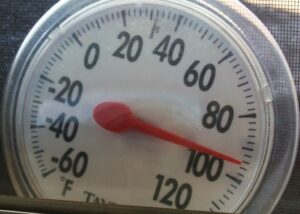 Why is Extreme Heat Dangerous?

There are several populations of people that are more susceptible to the danger of heat waves. The elderly, young children, and those who are ill, are more prone to the effects of extreme heat. Heat can be life threatening if proper precautions are not taken. In fact, according to the National Weather Service, excessive heat is the leading weather related killer in the United States.

In extreme heat your body has to work extra hard to maintain its regular temperature. In addition, the signs of heat related illnesses can be similar to other illnesses and conditions. The signs and symptoms can be disregarded at first. Ignoring your body’s reaction to extreme heat can be very dangerous. Some of the first symptoms may include: excessive sweating, rapid pulse, dizziness, exhaustion, vomiting, and headache. Again, ignoring any of these symptoms can be life threatening. 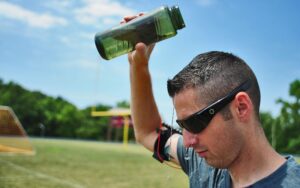 Preparing for a Heat Wave

Another way to help prepare for extreme temperatures is to be sure that sunlight is not entering the home. Pull the curtains and draw the shades. Limiting sunlight will not only keep your house cooler but will also save you money on your air conditioning bills.

Another very important part of being prepared is to have a plan. What will you do if there is a power outage? How can you remain cool if you’re at work, traveling, or just staying home? Do you have a backup generator? Power outages are especially common during a heat wave because it takes a lot of energy to run an AC unit. With so many people using theirs at one time it can cause too much pressure on the power grids. Have a plan in place just in case a power outage occurs. It’s also never a bad idea to have an emergency kit as well. Be sure to have a first aid kit included in this bag. You should also brush up on your first aid skills just in case. 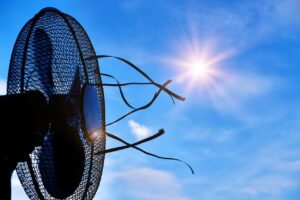 Getting Through a Heat Wave

It may be obvious, but you should never leave a child, pet, on anyone elderly alone outside during extreme temperatures. This includes leaving them in the car while running errands. Police in Arizona emphasize that even for a second the temperatures inside a car can be deadly. Their research has shown that if it is 80 degrees outside then the estimated temperature inside of a car is upwards of 150 degrees Fahrenheit.

If your town or state is experiencing extreme temperatures you should do your best to remain inside during the hottest times of the day (10 am-4 pm). If you do not have access to an AC unit then you should attempt to stay on the lowest floor level possible and keep blinds and windows closed. Another idea is to head somewhere that does have air conditioning. Shopping malls, cinemas, or libraries may be an option during an exceptionally hot day.

It is also incredibly important to stay hydrated. Even if you are not thirsty you should be drinking water. Try to avoid sugary drinks, excess caffeine, and alcohol during these times. Your eating habits should also change a bit. Try to eat smaller meals more frequently as opposed to large meals. 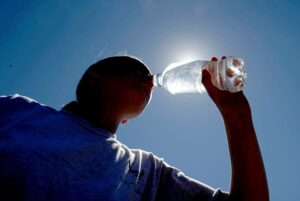 Heat waves and extremely high temperatures can be dangerous – or even deadly. Knowing how to combat the heat and stay cool and hydrated is extremely important. If you start feeling overheated use a wet washcloth or sponge to cool down and try to get to an air conditioned area if possible.