How To: Treat a Snakebite

Snakes live just about everywhere. You can find them in the desert, in the forest, and in your backyard. They live where it’s hot, in the water, where it snows, and even in the sea. It’s probable that you’ll encounter a snake during your lifetime. Depending on where you live, it may be probable that you’ll encounter a venomous snake during your lifetime as well. This is why it is so important to know what to do when you see a snake, and more importantly, what to do if you are in fact bitten. 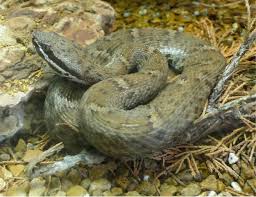 You may have heard the phrase “they’re more afraid of you than you are of them,” and this is true of snakes. Snakes are not known to attack, or go after humans, without being provoked. Snakes are meat eaters. They typically eat small rodents, frogs, lizards, and insects. Humans are not their prey. They do not want to eat us. If they bite it is because they felt threatened.

There are approximately 3,000 snake species in the world, and luckily, only about 400 of those are venomous. In North America there are only about 25 species of poisonous snakes. Luckily for us, we are less likely to encounter them than some other countries. 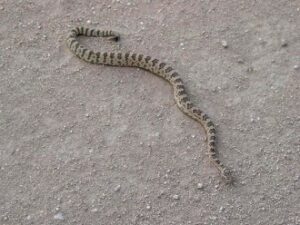 In addition to being carnivores snakes are also cold blooded. This means that their internal body temperature is impacted by the outdoor temperature. They are unable to increase their body temperature, and in turn stay active, when it is cold outside. Snakes are most active between 75 and 90 degrees Fahrenheit. Depending on which state you reside in this may be only a few weeks out of the year or it may be a lot longer.

A unique fact about snakes is that just because you have been bitten by a venomous snake does not necessarily mean you have been exposed to their venom. Confused? Snakes are able to regulate whether or not venom is released. They can “dry bite.” This essentially means they can in fact bite you but not release any venom. In fact, between 25% and 50% of all bites are dry bites. You may not know whether or not venom has been released so always assume it has been. It’s better to be safe than sorry. 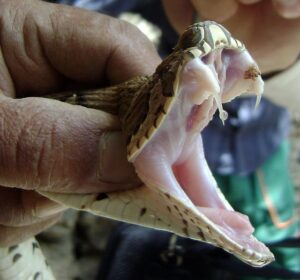 Let’s face it, you aren’t going to change your lifestyle based on the habits of snakes. If you live in the South you know that the majority of your year is the perfect time for snakes to be out. I wouldn’t recommend planning your day around snake behavior. Continue to be outdoors, enjoy nature, and explore. You should, however, be mindful of your surroundings. No matter where you are you should be checking your surroundings. Before jumping in the water check that there’s no snakes enjoying it too. Before hiking through the woods check the ground before walking. These things are easy to do as you continue to live your life. In addition, if you do plan on going off the path or walking through tall grass you should wear boots. You should also refrain from putting your hands or feet in places that you cannot see. Snakes tend to hide out in small crevices so be careful if you can’t see inside.

It might be pretty self explanatory but if you discover a snake do not approach it. Walk away and give it space. Even if you think the snake is dead, do not approach. Some snakes, such as the Rinkhals, play dead and then strike when it’s disturbed. 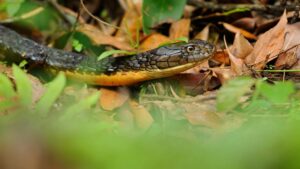 If the snake is slithering forward and continues to move in the opposite direction you are probably safe. Just continue on your way and do not disturb. If the snake rears up and flattens its head out it is definitely feeling threatened and you should act with extreme caution. Slowly back away. Most snakes move in a side to side motion and very few move in a straight line. Use this information to walk away in a straight line and get as much space as possible between you and the snake. 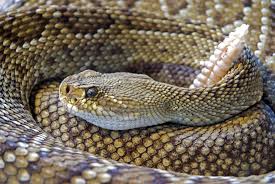 It doesn’t really make a difference if you know which snakes are venomous and which snakes are not. No matter what, you should not be approaching or interacting with any snake you encounter. Leaving them alone is always the best option. However, if you are concerned about having the ability to decipher harmless snakes from venomous snakes you can look into the snakes that are common in your area.

As previously stated, just because a snake is venomous does not necessarily mean that they will inject venom when biting. This does not mean you can provoke a snake. Again, it’s best to just leave them alone. 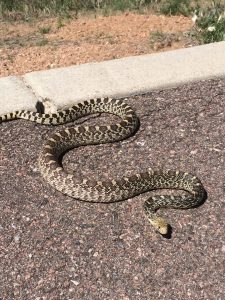 I hope you never find yourself in this situation, however, if you do it’s a good idea to be prepared and knowledgeable on this topic. The most important thing you need to do if you’re bitten by a snake is to remain calm. This is probably easier said than done, I understand. Panicking will only make matters worse because it increases your metabolism and will in turn spread the poison faster.

The poison in snake venom is comprised of many different substances, including varying proteins. These proteins can be broken up into four categories

Each of these proteins are unique to how they interact in the body. Cytotoxins directly affect the local tissue. Hemotoxins cause internal bleeding. Neurotoxins impact the nervous system. Cardiotoxins affect the heart. No matter the type of bite you encounter you will want to treat the bite in a similar fashion.

The very first thing you should do is call emergency services or get yourself to the nearest hospital. The next step is to wash the bite with soap and water. You can cover the area with a cold compress but do not apply a tourniquet.  Try to remain as calm as possible. You’ll also want to remove any and all jewelry. Watches, rings, or even constrictive clothing can cause more damage in the long run if you have swelling.  If possible, draw a circle around the area in order to monitor the initial reaction. In addition, if possible, it will be helpful to know what color, size, shape, or species of snake bit you. This will help with anti-venom if needed. 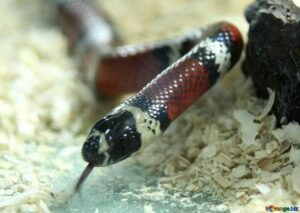 Although this probably goes against popular belief, you should not try to suck the venom out by mouth. Medical professionals will give you medication to help with pain, antibiotics to prevent infection, and an antivenom if required.

The initial reaction following a snake bite can be misleading. You may not feel any effects immediately after the puncture. However, a victim can have no symptoms but suddenly have difficulty breathing and go into shock. This is why it’s important to seem medical attention following any and all snake bites.

The signs and symptoms of most snake bites can be broken down in to several categories: 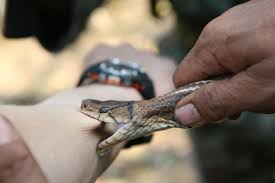 Snakes are a part of this Earth and depending on where you live you are likely to encounter them throughout your lifetime. The best pieces of advice is to give them space and never disturb them. If you are bitten, however, seek medical attention right away. Also, apply a cold compress after washing the bite with soap and water. If possible try to remember, or write down, what the snake looked like so it will be easier for doctors to assist you. Drawing an outline of the effected area is also helpful when you seek treatment. Medical professionals are always the best resort, even if you aren’t feeling any immediate pain. Snake bites can be extremely damaging and even deadly but with the proper knowledge you can prevent these bites from even occurring in the first place.