If you’ve read our previous articles on the importance of filtering your water and how to go about doing this then you know that there can be some pretty terrible consequences if you’ve ingested untreated water. Water is one of the most important things you will need while in the wilderness. Your body can only survive up to three days without water (this is the survivalist rule of 3). This rule definitely doesn’t mean you can go around drinking any water though. Drinking unfiltered water can not only lead to some pretty nasty symptoms but can also lead to death in some extreme cases. One the most common waterborne pathogens that affects both humans and animals is giardia. 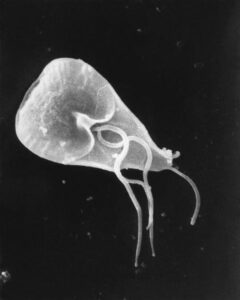 Giardia is a waterborne pathogen. In fact, it is one of the most common waterborne infections in the United States. Giardia is so common because it can be found in lakes, rivers, streams, and ponds. In addition, the speed of the water flow has no impact on the amount of giardia pathogens present. The water can be stagnant or moving at a fast pace and could still contain this bacteria. Both humans and animals can pick up this infection.

Giardia is a parasite that feeds off of another host to survive. In this case, you’d be the host. Once a person or animal has been infected with giardia it will live in their intestines and will be transmitted through feces. To make matters worse, once it is outside of the body the pathogen can continue to survive for months. 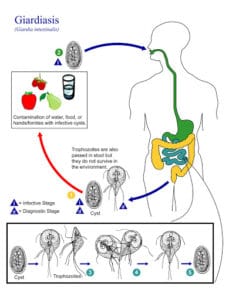 If you drink infected water or food you are actually ingesting giardia cysts. These are the pathogens in a hard outer shell. These cysts are shed through waste by the billions. Even though billions are released through feces of an infected person or animal you only need to ingest approximately 10 cysts to start seeing symptoms.

How Is It Transmitted?

As previously stated, one of the ways it can be transmitted is through fecal matter. But the most common way to ingest these giardia cysts is to drink water that contains these pathogens. It only takes a few of these to enter into your body before you start to notice symptoms of the infection.

Once they are inside your body they are multiplying rapidly. In fact, the acid in your stomach encourages the cysts to break open and two trophozoites are released. So for every one cyst, you have two trophozoites. Essentially these are the free moving form of the bacteria. It can also be transmitted directly from person to person contact as well as through contaminated food.

If you are a survivalist you need to be careful about what water you are drinking, especially if you are not filtering it correctly. The likelihood of contracting giardia is greater if you aren’t filtering your drinking water. 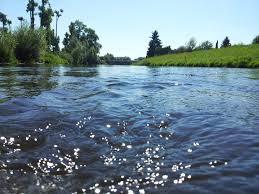 This is why you should also be sure to carefully wash any food before eating. This is especially true if you have trapped, caught, or foraged for your own food.

Infections span about 6 weeks. However, you may have a secondary reaction after the initial infection. You could also be infected and be showing little/no symptoms and still be passing the bacteria on to others. 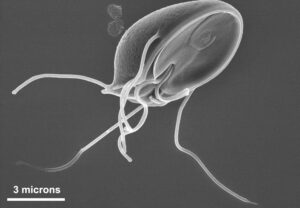 What Are The Symptoms?

Any infection is going to give you pretty nasty symptoms. Bloating, nausea, cramping, and diarrhea are the most common symptoms. The duration of these symptoms can vary from 2 weeks to 6 weeks. Sometimes these symptoms can continue longer as well as have lasting and damaging effects on the digestive system and the intestines. Dehydration is also something to be mindful of it you ever contract this bacteria. Diarrhea can lead to dehydration or malnutrition, which can be fatal.

It has also been found that some people actually develop an intolerance to lactose due to their giardia infections. Just because the symptoms have passed does not mean that you are free from the impacts of this infection.

Is There A Treatment?

If you suspect you have a giardia infection or any other waterborne infection for that matter, you should see a doctor immediately.  Testing for giardia, in both humans and animals, is done with a stool sample. If you are showing symptoms of this infection and are unsure if you have drunk from a questionable water source you should be sure to tell this to your doctor. 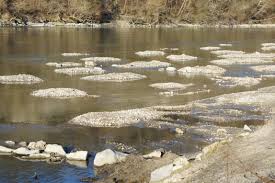 Although your symptoms may clear up in a couple of weeks you will want to check in with your doctor. As stated before, the lasting complications of this infection can be serious. It may also be extremely uncomfortable to just let the symptoms run their course. Doctors can provide antibiotics to help ease the symptoms and kill off the bacteria more quickly.

If you are in the wilderness and don’t have immediate access to a doctor, but you begin to show symptoms there may be another option. It is believed the plants that contain berberine, such as oregon grape, bayberry, and goldenseal can be used to help ease symptoms. Simply chew on the plants’ roots to release the berberine. It has antifungal and antimicrobial properties and may help on a short term basis. Either way, this is not a permanent treatment and you should still seek the help of a medical professional as soon as you can. 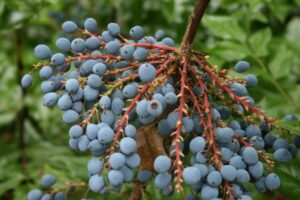 How Do I Prevent This?

The best way to prevent a giardia infection is to be sure you are only drinking filtered water. There are numerous ways to do this but one of the easiest is to buy a purifying straw. You can also boil water in order to get rid of any pathogens. To learn about additional ways to filter water check out this article. If possible you can also strictly stick to drinking bottled water. You should always be cautious if you are unsure if the water is properly filtered or may contain other pathogens. Thousands of people contract giardia each year by drinking tap water so be sure you are filtering or boiling as often as possible. 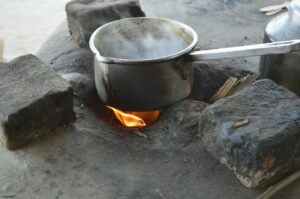 In addition, you should always be washing your hands before you eat and after using the restroom. Obviously this may not be as easy to do in a survival situation so if you do no thave antibacterial wipes or sanitizer then you need to be sure you are properly cleaning your hands to avoid contracting this bacteria.

A third way to help prevent this infection from spreading is to properly dispose of your waste. Be sure you are not using the restroom anywhere near where you sleep, eat, or drink. Having close proximity is only asking for trouble. This includes both human waste as well as animal waste. To be safe, you should always keep a distance of at least 150 feet between your living area and where you use the bathroom. 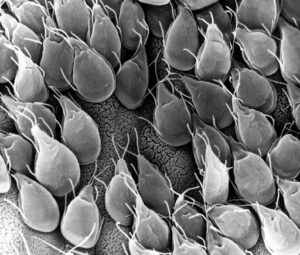 Giardia is not only common but easily contracted. Symptoms can last for weeks, and even leave you with lasting complications. It can be unpleasant, painful, and may even lead to extreme dehydration or death. It’s important to recognize the symptoms and know the ways to help treat the infection. Giardia is a pretty common infection and can typically be treated pretty easily. Know how to prevent these pathogens from entering into your body. As a survivalist, you should always have knowledge about common ailments that can be contracted out in the wilderness.

Facebook Twitter Email Pinterest linkedin
Filtering water with rocks and sand can be an interesting experiment. Just because the water may seem clear to the naked eye does not m...