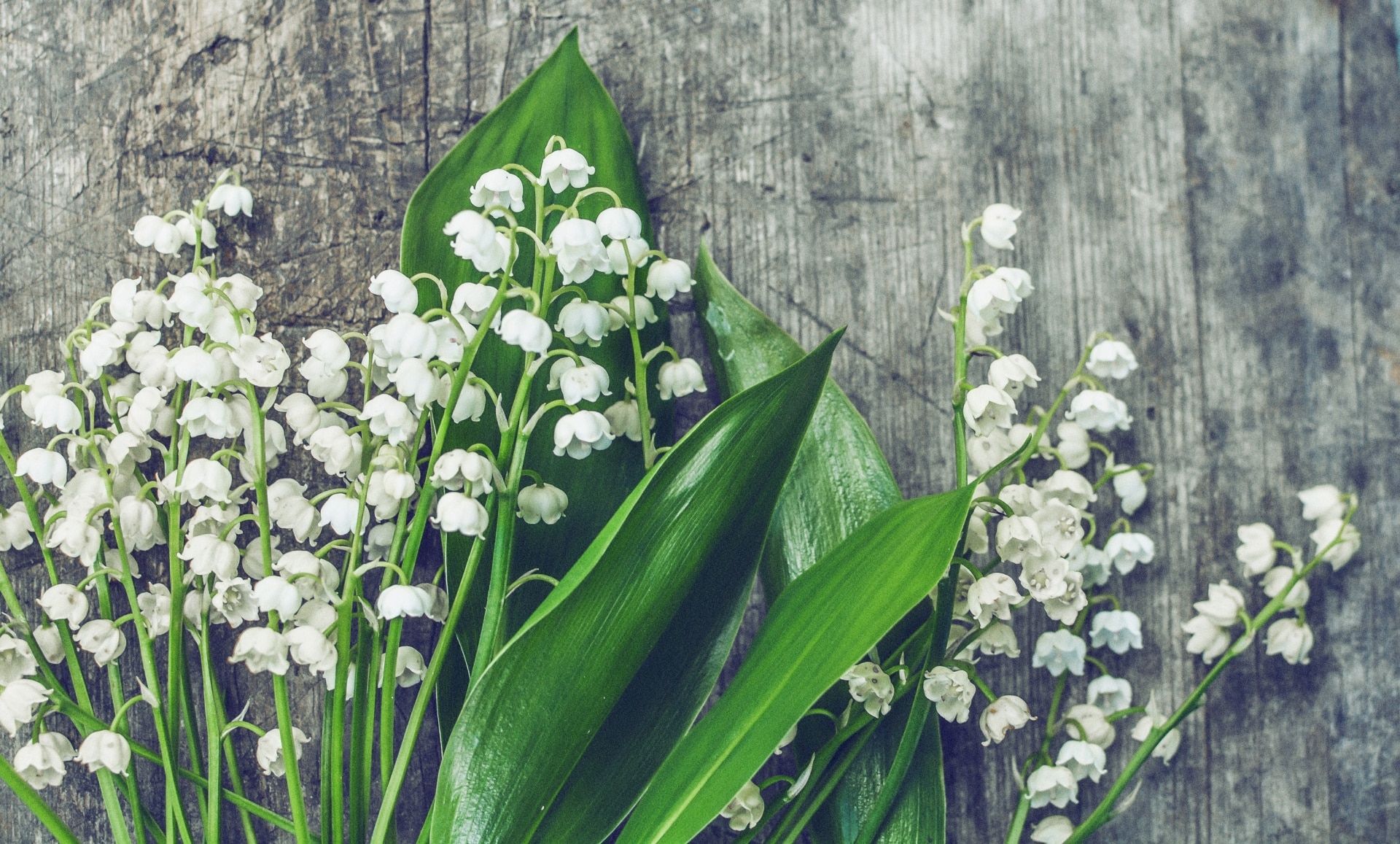 There are many plants around the world that can cause harm to humans if ingested. Some might even be plants you have in your garden. We aren’t saying you cant keep these plants in your yard, but you should be mindful of any furry friends that might try to eat them. You should also be a little more careful if you have youngsters running around.

Not only is important to have his information to keep you safe in your own personal yard but it may also be helpful during a survival situation. If you are in the wilderness and are relying on nature for food you may encounter some of these plants. Having the background knowledge of what is toxic or even deadly could quite literally save your life. Some of these plants can be fatal. Below is a list of the ten most common plants that can cause some serious harm if consumed.

Lily of the Valley 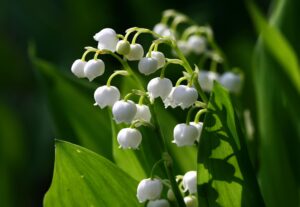 If you’ve seen Breaking Bad then you know that lily of the valley is poisonous. These little bell looking flowers, although cute, can be deadly. All parts of this plant contain toxins that can inhibit the pumping of the heart. Children and pets have the biggest risk due to their size but even a full-grown man can be taken out by this plant.

Common effects are dizziness, blurred vision, seizures, diarrhea, and even death. If you happen to have these in your garden and also have pets or children I would recommend removing them immediately. 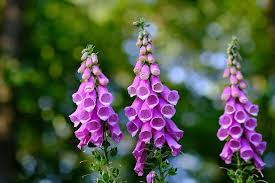 Found throughout the United States, foxglove is often used in gardening due to its vibrancy and stunning flowers. Despite being fairly common this plant is entirely toxic. All parts of this plant including the flower, seeds, fruit, stems, and leaves are toxic and can cause death. The chemicals in this plant re so potent that they are actually extracted and used for medicinal purposes. To be clear, one of the chemicals produced by this plant is used in very small amounts as a heart medication. It increases blood flow and helps a weak heart pump faster. Ingesting this plant is essentially taking an unregulated dosage of heart medication. As you can imagine this can be fatal.

changes in heart rate are the most obvious and common symptoms. Consuming this plant can be extremely dangerous. This is also a good example of why you shouldn’t try to prepare your own herbal medicines. Consuming too much of this plant can lead to death. 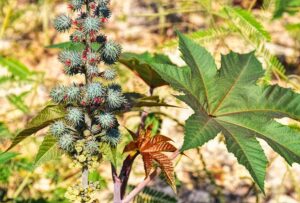 I’m sure you’ve heard of castor oil. Did you know it comes from a plant? Castor oil is made by extracting the oil from the Ricinus communis plant. These seeds, known as castor beans, are toxic. We are able to use the oil because it goes through a heating process which eliminates the toxin from the oil. Without going through this heating process the seeds can be fatal.

Castor oil is not only used in food but is also used in many home remedies. From hair growth to smooth skin you have probably heard of the various uses for castor oil.

The toxins from the seeds work quickly if they are ingested. They are absorbed directly through the intestinal tract and symptoms can be seen within hours. Diarrhea, severe vomiting, abdominal distension, and tremors are all symptoms of castor oil toxicity. If consumed you would need to immediate remove the seeds from your digestive tract by vomiting or administering activated charcoal. Seek help if you think you have castor oil poisoning. 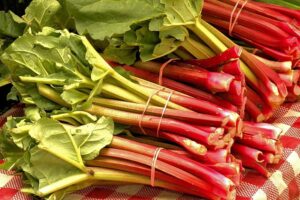 Let’s not get confused with this one. You can eat rhubarb. With this being said, you should only consume the stalks. Even though the’re pretty tart when eaten raw the stalks are often made into pies, jams, and muffins. Did you know that the leaves are incredibly toxic? Rhubarb leaves contain oxalic acid which can lead to kidney failure and death.

You’d need to consume a large amount of these leaves in order to see severe symptoms. Either way you should be careful when cooking with them to be sure you are only using the stalks. 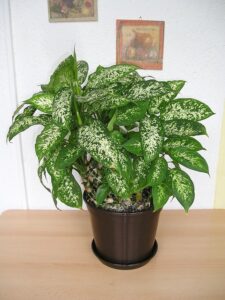 More commonly known as dumbcane, this plant’s leaves are especially toxic. Chewing on one or ingesting one can lead to swelling of the mouth and tongue which is turn can cause a loss of speech or even suffocation. In fact, the leaves are so toxic that even brushing up against them can lead to skin irritation.

Despite having these drawbacks the dumbcane is known to be the most common houseplant. This is because it is incredibly easy to maintain. If you do happen to have a dieffenbachia plant in your home maybe reconsider or place it out of the way of children or pets. 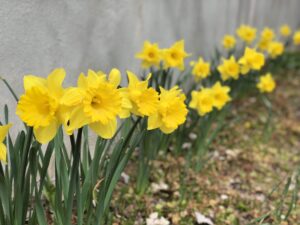 Another flower that is very common in gardens is the daffodil. Known for their yellow color and beautiful flowers this plant’s bulb is especially poisonous. Although the bulb contains the most toxins all parts of the plant are toxic. You will want to reconsider planting these in your yard if you have a dog. You’ll want to be especially careful if your dog likes to dig.

Ingesting this plant can lead to symptoms of mouth irritation, vomiting, low blood pressure, liver damage, and gastrointestinal issues. Typically these symptoms resolve on their own within a few hours. Consuming a large amount of daffodils is a larger problem and you should seek help. You might be wondering – why would someone eat a daffodil? Due to the fact that the bulbs are underground and resemble an onion they are often mistaken for each other. The main difference between a daffodil bulb and an onion is the bulb does not have that typical onion smell and will not make you tear up. 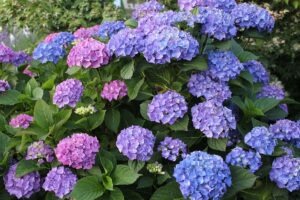 If you’ve ever seen a hydrangea you know that they are quite stunning to look at. Their blooms are unique because they grow in a large bunch on top of a long stem. They come in beautiful purples. Do you want to know why these flowers are so deadly? They contain cyanide. Although the levels are pretty low and you would have to ingest quite a bit to get cyanide poisoning you should definitely still be aware if its dangers.

Hydrangeas are also poisonous to dogs, cats, and horses. All parts of this plant contain small amounts of cyanide. Symptoms of poisoning include diarrhea, vomiting, and intense stomach issues. Again, it is rarely fatal unless a large amount is consumed. 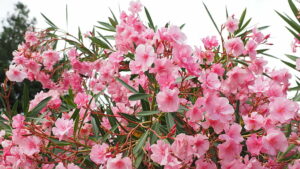 These white, pink, or red flowering plants are extremely toxic despite being beautiful to look at. This particular plant is especially dangerous because every single part of it is toxic. You can experience symptoms, or even death, by eating the flowers, stem, leaves, and twigs. In addition, this plant is extremely potent and even ingesting a single leave could lead to death.

Luckily, these plants are known to have a pretty horrific taste so many animals steer clear of eating them. They can be toxic when they are fresh as well as when they are dry. On top of that, you could even notice symptoms of poisoning if you drank water from a vase that had contained oleander. The sap produced from the plant can cause severe skin irritation and if you ever burn an oleander plant the smoke can also irritate the skin due to the toxins. 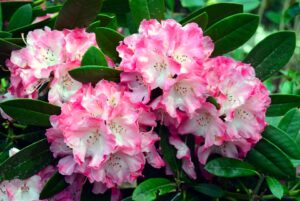 These colorful flowers are fairly common to have in your backyards. They offer beautiful blooms and lush leaves. Despite being a well known flower the rhododendron is fairly poisonous. If small quantities are consumed it may not be a big issue. However, if a large amount of the plant or the honey it makes is ingested then it can be life threatening. The toxic honey associated with this plant is often known as “mad honey” due to the confusion is causes as one of its symptoms. Although ingesting the honey produced by this flower is one of the top ways one would become poisoned it is not the only way. You should also avoid eating the stem, leaves, or flower.

Each Spring, Poison Control receives numerous calls from people who have accidentally sucked on the leaves thinking they were honeysuckle. The symptoms can include nausea, vomiting, mouth irritation, and confusion, 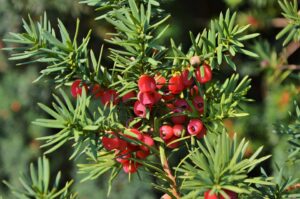 The yew plant is an evergreen shrub with distinctive red berries. It has needle like leaves and downward hanging branches. These plants can literally live thousands of years. Ironically, the red berries are the only part of the tree that is not poisonous to humans. Even though this tree is highly toxic it was used by many ancient civilizations for medicinal purposes.  You may have seen yew shrubs around churches and other religious building. They have come to symbolize living a long life and have been incorporated into several religious ceremonies and gatherings.

Symptoms of the yew plant are often dizziness, dilation of the pupils, lethargy and weakness, irregular heartbeat, and even death.

You might not have been aware that there were so many common plants that can be fatal if consumed. Having this knowledge will not only help you if you’re in a survival situation and are relying on natural surroundings as a food source but it can also help you stay safe in your own backyard.